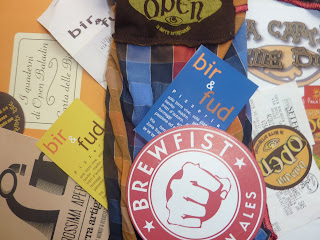 
The historical novelist, playwright and poet Sir Walter Scott once said "Methinks I will not die quite happy without having seen something of that Rome of which I have read so much."
It is true that there are many many guidebooks about the Eternal City. The history, art and architecture have inspired many an author to put pen to paper, and while there are several guide books that concern food and wine, they seldom, if at all, touch on beer.
The only avenue open to the beer traveller to Italy is the internet, and particularly its social media networks. Check out the excellent Italy Brews to point you in the right direction. Fortunately I was also helped by my good friend and top beer explorer Thomas Marshall (@tdtm82) and on twitter by Bob Arnott (@RecentlyDrunk) to find the best bars. Cheers guys!
Here's what happened.

We (just me and my wife, Sarah - no children this time) arrived just before lunchtime on Monday (29th October) after a very early start, and as we couldn't check into our hotel for an hour we had a little scout around the local area and found a little pizza place nearby. With my courgette flower and anchovy pizza my first beer in Rome was Birra Peroni - Nastro Azzurro, quite often the best of a bad bunch at restaurants and bars back in the UK. Pleasant enough but having had some exceptional offerings from Brewfist and Birrificio Lambrate in the few weeks before I went I wanted something more.
That was to come later.
After checking in and sorting ourselves out we set out map in hand to explore. The Spanish Steps and Trevi Fountain were close at hand, but as wife has my wife has a huge interest in Roman history we found ourselves, after much walking, at the Colosseum via Trajan's column. It was early evening so we didn't go in and our thoughts soon started to turn towards dinner. 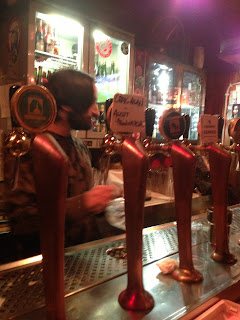 Venturing across the Tiber after a quick walk across the Circus Maximus and witnessing the spell-binding sight of thousands of starlings looking for a place to roost, we found our way (eventually) to Bir & Fud. We went in and asked for a table only to be told that it didn't open until 7:30, an hour away. Explaining that we'd come a long way that day, we were directed across the road to Ma Che Siete Venuti A Fa (the bar is pictured above) or Football Pub as it's also known on account of showing football matches on screens strategically placed around the place, all the time.
This is exactly what I'd been looking and hoping for, great beer and a great atmosphere, and I settled down with a wonderful hoppy, malty milk-chocolate edged Black IPA by Birrificio Menaresta called 2 Di Picche (2 Of Spades). I was anxious for more Italian beer, and changing beer direction completely I picked Seta (Silk) a delicious lemon and tangerine tasting Witbier by Birrificio Rurale. A man behind me said over my shoulder in excellent English, "Good choice there". He was putting on his coat to go, and with a swift goodbye he was gone. 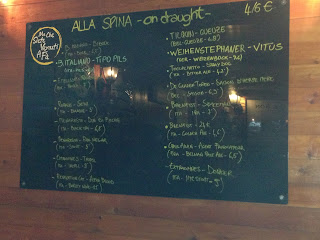 ﻿ Whilst perusing the board (above) for my next beer, I noticed that another couple sitting at the bar were also English. Seems we were a little early for the majority Italian drinkers (although there were a few in there) and we quickly got talking to them about beer, both British and Italian, with a healthy disagreement over the term 'Black IPA'. It turned out that Vince (for that was his name), on holiday with his charming wife Sue, is the current Chairman of North West Yorks CAMRA , and a thoroughly nice and engaging chap. They, like us, had intended on going to Bir & Fud  but had arrived too early and been ushered in here.
There was time for one more drink so I went for another Birrificio Menaresta beer, Pan-Negar a thin coffee tasting stout with a lovely creamy finish. Thirst suitably quenched, the four of us having struck up an immediate friendship, decided to head across to Bir & Fud for some dinner. 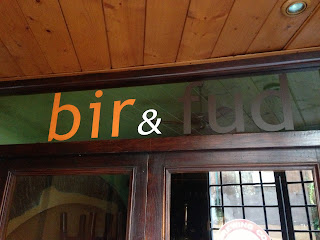 Bir & Fud is best descibed as a linear bar and restaurant and a beer lovers paradise. It was the one place that everyone who had been to Rome had, without exception, said that I must visit. Essentially a pizzeria but the menu stretches way beyond that, and the food is all beautifully presented. After being shown to our seats and scanning the menu, it was time to order a beer from the board (below). 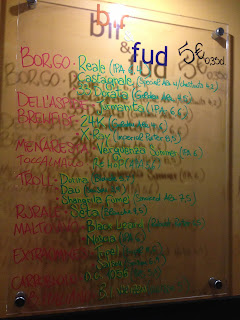 Vince and I opted for the Re Hop by Birra Toccalmatto. This was lemony hop heaven with lots of fizzy sherbert, a little honey and an added twist of lime in the finish. Delicious. For food Sarah and I both went for the Sea Bass and Haddock burger which was simply divine, served with hot and spicy pickled vegetables, whilst Vince and Sue opted for pizza. I washed this all down with a Noscia, a robust citrus hoppy American-style Pale Ale by Maltovivo, and complimented the food nicely. 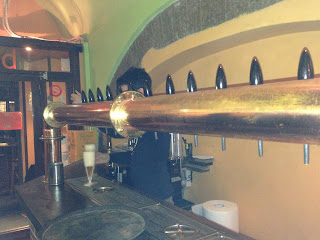 Time for another beer, and both Sarah and I went for a Weizen (called Weizen) from Birra Artigianale Italiana, Birrificio Italiano (being poured in the above picture). This didn't disappoint either, clove, vanilla, banana and bubblegum flavours working wonderfully together, and this slipped down rather quickly. After a brief interlude where we 'Skyped' the children back in the UK and chatted to a Belgian couple with a baby in a pram at the next table, I went for another beer. Bir & Fud has 3 enormous beer fridges packed with big bottles of Italian beer that is situated right between its bar and the restaurant sections, and one bottle in particular had been catching my eye since I'd arrived: 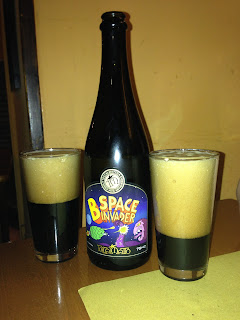 B Space Invader by Birra Toccalmatto is a much travelled and much transformed beer. Originally brewed as a Galaxy-hopped Golden Ale at Brew Wharf, London as a collaboration brew with Toccalmatto's Bruno Carilli, this Italian version has metamorphosed into an awesome Black IPA. Packed with black coffee, spikey pine, liquorice and citrussy hop flavours it was simply stunning. The perfect end to a wonderful first, but very long and tiring, day.
Saying goodbye to Vince and Sue, we got a taxi back to our hotel.
Sleep was not long in coming that night, and very welcome.
Little did we know the delights that still awaited us ...
Posted by Justin Mason at 18:47