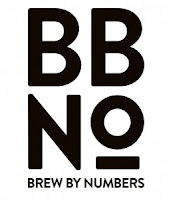 From the first time I saw an image of the labels on their bottles I thought, I hoped, that BrewByNumbers might be a bit special. I was yet to taste any of their beer and so this was more than a little premature and probably a bit dangerous, but their minimalist and simplistic style appealed to me and a part of me just seemed to know that it was going to be good. Now I'm fully aware that you should never judge a book by it's cover but I'm pleased to say that I shouldn't have worried. If you'd like to read about Brew By Numbers and how they started you could do a lot worse than read this blog by one of my newest friends in beer and all round good bloke who goes by name of Sid Boggle.

Back to the beer. It pours a translucent pale yellow with that big bubbly white head that you'd expect with a saison. The aroma is fantastic. There's bucket loads of spicy coriander, lemon, satsuma and nectarine, all fruity, zesty and with a faint herby tingle. It skips lightly over the tongue whilst nipping at it's edges, although it's quite playful and soft unlike the more aggressive attack you get from a big hoppy IPA. The taste is all chewy fruit salad sweets, ripe galia melon and a few grains of white pepper leading to a lemon drop core surrounded by some wonderfully juicy peach. The finish has a crack of spicy Szechuan pepper seeds, warm and tinglingly spicy, followed by a finely ground white pepper and lemon dryness. This is an accomplished saison indeed, easily holding it's own against many of the others in what has become a very popular style of late. The numbers, 01 01, representing style and recipe respectively, would seem to indicate that this is their first commercial brew and if this is the case than they have certainly had an auspicious start. I have a good few more Brew By Numbers beers to review in this series and if this little cracker is anything to go by then I'm in for a real treat.
Posted by Justin Mason at 19:14