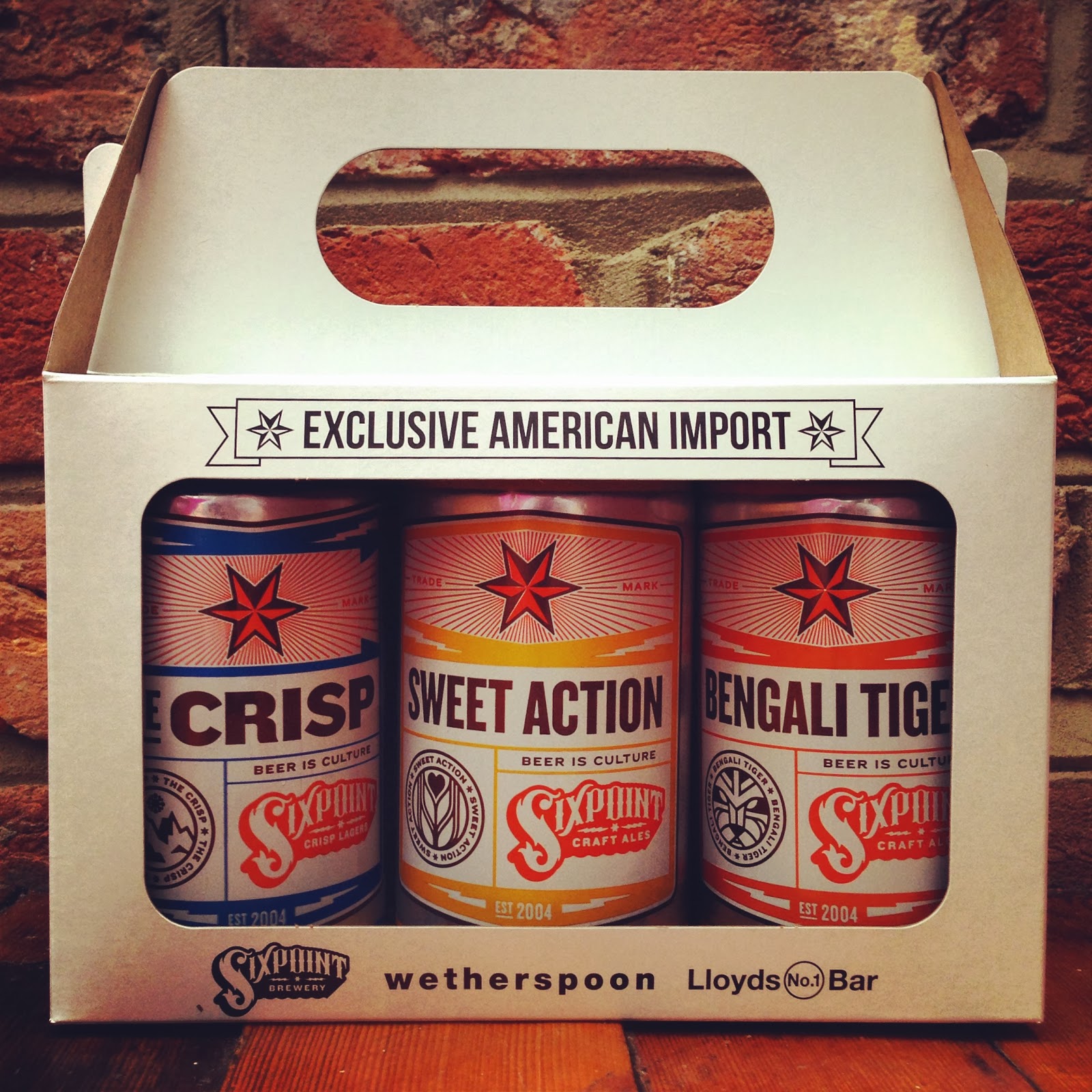 Last week I got an e-mail from Eddie Gershon, Public Relations for JDWetherspoon, with a press release concerning a range of three canned beers from Sixpoint Brewery that would shortly available in their pub chain. It also stated that they would be sending me the three beers to enjoy by 28th February, and on that day they duly arrived as promised. I'm quite a fan of beer in cans, well good beer in cans at any rate, and wrote a piece on them just over a year ago which you can read here should you care too, which was a time when there was very little available in the UK. How times change.

Sixpoint Brewery, as you may be aware, is a brewery situated in the Red Hook neighbourhood of Brooklyn, New York, in 2004, and takes it's name and symbol from the six-pointed 'Bierstern' or 'Brauerstern' (Beer Star or Brewers Star) which was used in Germany both the tapping of beer and the Brewers Guild. Andrew Bronstein and Shane Welch it's founders who both grew up in and around New York itself, met as classmates at the University of Wisconsin, and set themselves up in a former filing cabinet manufacturing factory site with Bronstein providing most of the capital and Welch, a keen homebrewer, providing the recipes. They first started canning their beers in 2011, with The Crisp, Sweet Action, Bengali Tiger and a fourth beer, Righteous Ale, being the first to come in this particular packaging.

JD Wetherspoon first featured Sixpoint beer when brewers Jan Matysiak and Heather McReynolds travelled over to Adnams to brew Bengali Tiger with brewer Belinda Jennings at the Southwold Brewery. This seven hop monster, it's brewed with Centennial, Galaxy, Cascade, Columbus, Chinook, Magnum and Simcoe in case you're wondering, was part of Wetherspoons 'American Craft Brewers Showcase' and was received rather well, with my Untappd notes mentioning pine, toffee, lime banana and grapefruit. Righteous Ale was on the bar at Wetherspoons pubs in January when Jan Matysiak came over to Adnams again, this time with Shane Welch to brew this rye-based beer, although it uses a fair variety of malts I'm told, along with Columbus, Cascade and Chinook hops.

Onto the beers themselves. I've decided to drink them in ascending order of abv, starting with the lager as I think this will enable me to appreciate them without my palate getting too much of a bashing. 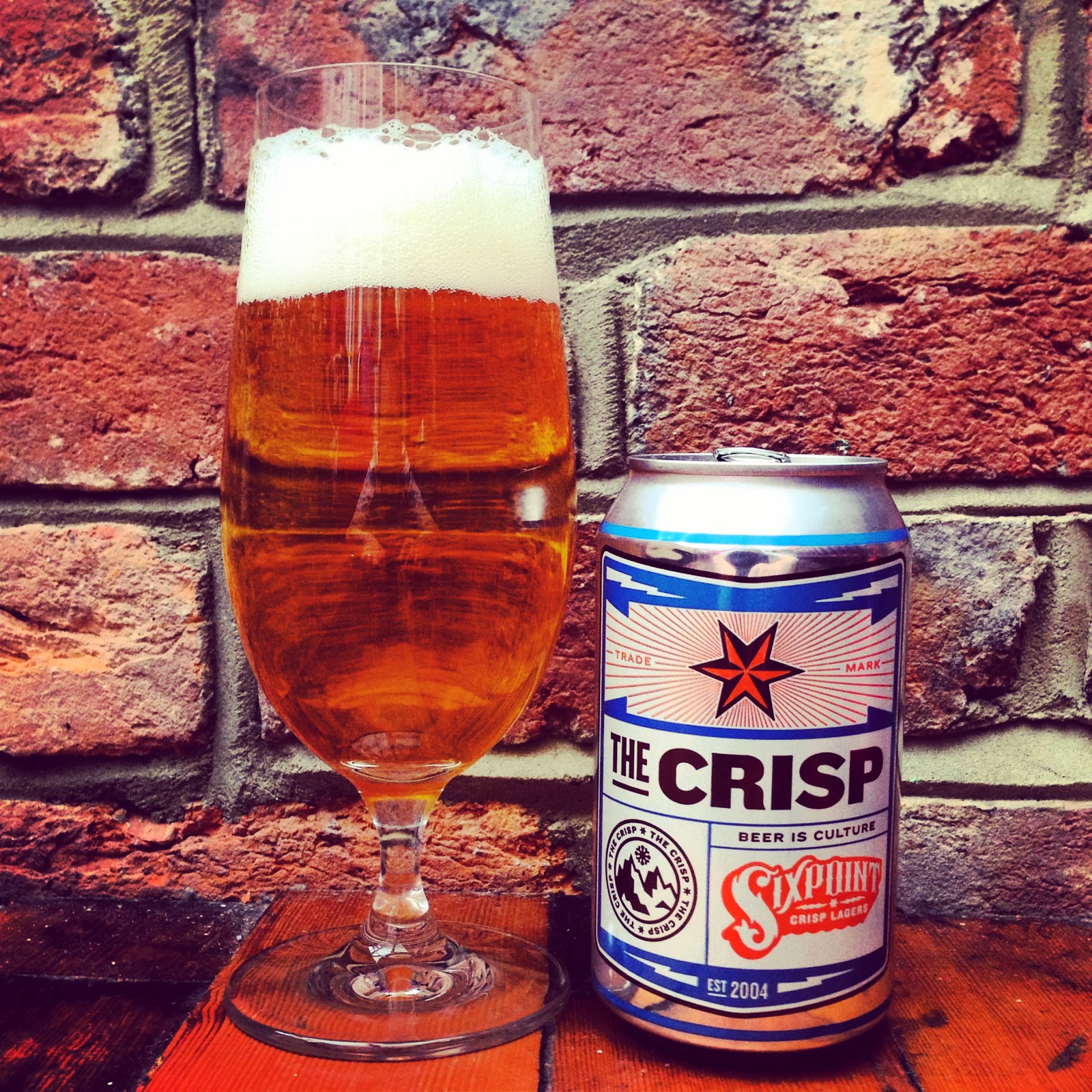 The Crisp, a pilsner-style lager, pours a pale yellow with a pure white fluffy head and the aroma of grassy dry lime and the merest hint of watermelon, making it seem both dry and sweetly juicy at the same time. Soft and smooth with a mousse-like feel in the mouth, a rolling bitterness starts at the back of the throat before coming all the way back to the tip of the tongue with a crisp (hence the name) grassy weak orange squash flavour that isn't gassy at all and leaves a pleasant if short-lived aftertaste. It's smoothness is impressive, there's nothing harsh here and it's very easy drinking, and while it's not blow-your-socks-off stunning it's certainly better than the vast majority of tasteless fizzy lagers available. 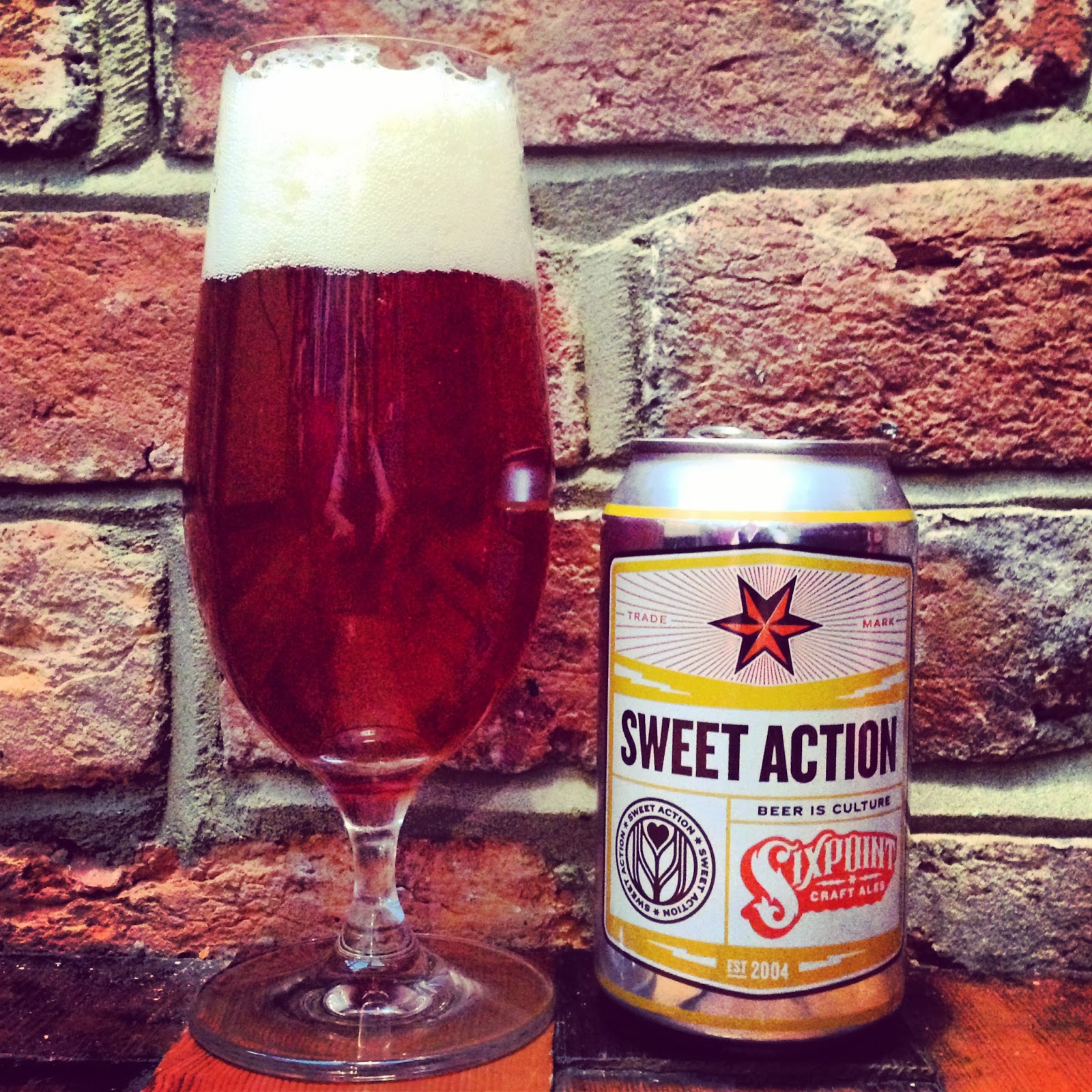 Described as 'part ale, part wheat, part cream ale' in the marketing-speak press release that came with the cans, Sweet Action pours a deep hazy orange colour with an off-white head that while initially lively collapses just as quickly so pour carefully. The aroma is heavy with sharp zesty grapefruit with a touch of lime and sappy pine but surprisingly, and possibly due to the combination of styles it professes to be, it's not the palate-puckering punisher that I was expecting. Instead it's smooth with a little prickle from the carbonation over the tongue and creamy caramel and orange cream flavours coming to the fore, interwoven with an undercurrent of the pine and grapefruit I detected in the aroma. The finish has echoes of those flavours lasting a long time and I much prefer this beer to The Crisp for the simple reason that it bring a lot more flavour to the party. Granted it's a completely different animal but to my taste I prefer something that is a noisier beer as opposed the whispering lager that might be a little too understated.

The third offering is the Bengali Tiger, a beer that I've previously had the cask-conditioned version of as I mentioned earlier. It pours a colour akin to those light brown pencils you might receive in a pack from a well-meaning relative when you were a child, with perhaps a slightly deeper orange hue, and an off-white head similar to that of the Sweet Action. The aroma of this beer is thick with damp sappy pine, bitter and a touch bready, but there's some juicy orange jelly sweets soaked in satsuma and grapefruit and a twist of lime zest. This is bitter from the outset and makes it's presence felt in the roof of the mouth which is where it fades to in the finish. There's lashings of fudge, toffee, grapefruit and orange barley with a little of that banana and lime that I picked up in the cask version, however it's all a little messy and mixed up with the bitterness over-powering those lovely gooey sweet flavours, cutting through them and roughly moving them aside. The finish is better, especially when the bitterness fades allowing those citrus-tinged caramel flavours to settle before they too disappear, but for my money I much prefer the Sweet Action with it's clever nuances.

So that's all three, and although they aren't perhaps the best canned beers from the US that you could pick up they're certainly more than good enough to satisfy your smooth pilsner craving or give you enough of hop hit to make you smile should you be in range of a Wetherspoons or Lloyds No.1. As for price, I'm informed that they will retail for £2.89 each and are included in the 'two for £5' offer which seems a reasonable enough price, and they will be available from March the 5th, which is this upcoming Wednesday as I write. I'm not the only one who received these beers and if you'd like to read a different view then my good friend Nate (@NateDawg27) published his take on them earlier today which you can read here should you wish.

It's good to see a US brewer putting it's canned beer in a major UK pub chain, and from what I gather from hints that they dropped on twitter recently Sixpoint have much more planned. It doesn't seem that long ago that I used to look open-mouthed at pictures that friends from the US posted on social media of row upon row of cans of craft beer on supermarket shelves wondering if that would ever be the case here, but with Camden Town canning their Hells lager and Beavertown to follow suit with Gamma Ray and Black Betty to come later this year, then perhaps we're a little closer to that happening on this side of the Atlantic than I thought.
Posted by Justin Mason at 14:22