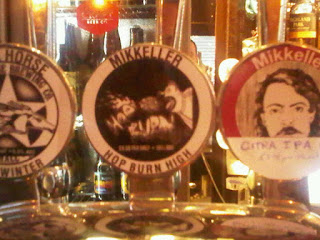 Well this is one I wasn't expecting to do today. It was supposed to be a Mikkeller day off today as I was out and about in London so wouldn't have time for a review. Fate intervened. We paid a visit to Craft Beer Co this evening and this tasty little double IPA was on tap and I simply couldn't resist. Apologies for the bad photography but the camera on my phone isn't great.
The name is a more than a little giveaway to what you should expect and if you weren't entirely convinced, a look at the tap sticker reveals a bit too. After a bit of bigging around on the internet I've discovered it was released on 14th December 2011 pitches up at 300 IBU's, so lets see what it's like. 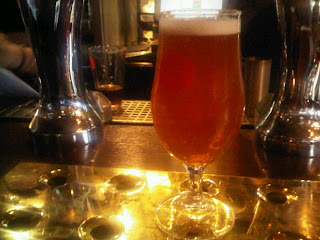 As you can (almost) see it pours a glorious sunset orange with quite a thin off-white head, and the aroma is pure sweet shop. Lemon sherbert, orange pips and cola cubes are very much to the fore, and a little sugary sweetness completes the experience. In the mouth it is initially creamy, then the expected hop bite starts to dry out the tongue, but unlike the 1000 IBU Ultramate this is a much more pleasurable and flavoursome experience. Sweet dry tangerine with a Cointreau orange alcohol hit kicks in before being overwhelmed with a wonderfully orange maramalade that spreads itself deliciously thinly over the tongue. The finish is big on dry zesty orange peel, tart and zingy.
The hop burn here is definitely tempered but it's the wonderful layers of orangey hops that are the real star. I'll certainly try to seek out the bottled version of this beer to see how it compares.