Starter: Flying Dog - Snake Dog IPA 7.1% on tap, with cheese souffle and caramelised onions.
The beer came a gorgeous cloudy amber with a thin white head served in a rather nice Meantime glass with the big aromas of pine and orange marmalade you would expect from an American IPA with a little spiciness in there for good measure. Smooth and oily on the palate, it doesn't attack the tongue with astringency but rather coats it with a zesty orange marmalade. Resinous pine flavours burst at the back of the throat creating a delightful orange pine bitterness drying nicely into a long aftertaste.
The beers zesty bitterness cut wonderfully through the creaminess of the cheese whilst the orange flavours combined combined with the caramelised onion to create an extra fruity dimension before washing it all cleanly away. 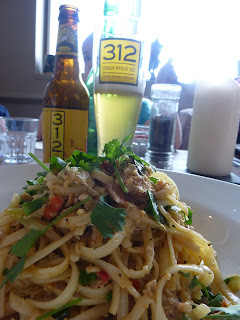 Main course: Goose Island - 312 Urban Wheat Ale 4.4% (bottle) with crab linguine.
This wheat ale, inspired by the city of Chicago (312 is it's telephone area code) pours a hazy pale white golden yellow with a lively white head. The dominant aroma is vanilla and lemon but with a grassy, zesty lime edge. Quite thin over the tongue, lemon and lime flavours sweep in with a little bitterness, before melting away into a light zesty clove and grassy lemon-curd aftertaste.
The lemon lime cleansed the palate of the admittedly slightly heavy crab and spicy chilli with the underlying zestiness of the beer balancing the whole dish perfectly. 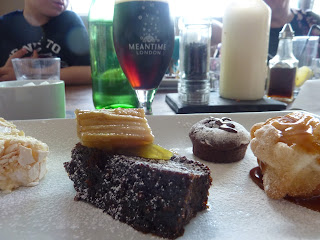 Dessert: Black Isle - Organic Porter 4.2% on tap with a tastings plate of four desserts (lemon meringue pie, ginger cake topped with poached rhubarb, chocolate fondant and banana fritter with toffee sauce).
This, the only British beer of the three, from the Scottish Highlands just north of Inverness across the Beauly Firth, pours a deep dark ruby red with a tightly carbonated off-white head. A roast coffe aroma has a enough milk chocolate backing it up to give it a faintly sweet edge. Thin and a little watery on the tongue, pleasing but not overpowering dark-roast coffe flavours rush in to fill every corner of the mouth. A dry white-pepper aftertaste has  deliciously light toasty smokiness, finishing an unusually palate-cleansing porter which is very nice indeed.
This beer worked very well with all the desserts refreshing th palate, but it was particularly good with the rhubarg topped ginger cake. I have to add that I didn't actually get to finish my tastings plate as my son, who you can just spot in the top left-hand corner of this picture, had designs on it himself. 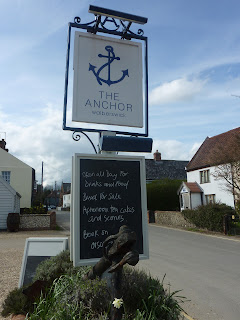 So there you have it. Three rather nice beers which you won't find too hard to obtain with a little searching, served in pleasant surroundings with wonderful food. Something a little different from me this time but as the beer, food and surroundings complimented each other so wonderfully I felt it was necessary to tell you about them all. If you fancy visiting for lunch at The Anchor then booking is advisable. It is about 40 minutes from Ipswich or an hour from Norwich by car and if you happen to be in Southwold for the day, the ferry across the River Blyth only costs 90p per or you can walk round. You can also stay there.
Cheers! ﻿﻿﻿﻿﻿

Posted by Justin Mason at 23:01 No comments: 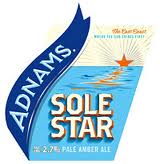 
Just got back from a few days in Suffolk. I'm fortunate that my parents live there (for the moment anyway, they are moving a little closer to me soon) and I always try to seek out some of the local beer when I'm up there.
One of my favourite places to get a pint of Adnams (and arguably the best place in the country) is the Lord Nelson in Southwold. It's situated in East Street, which leads down to the sea-front road, and on a nice day there is nothing better than standing outside the pub with a glass of Adnams and look out over North Sea. It's just perfect.
This review is not about the pub however, great though it is, it's about the beer. 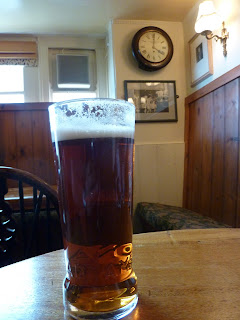 Sole Star is Adnams new 2.7% beer, introduced in December 2011 not only to take advantage of the reduced rate of general beer duty but also in response to a blog post from Fergus Fitzgerald in the August enquiring whether customers would be happy to drink a 2.8% beer. It's brewed with a mix of Pale Ale, Crystal, Black and Munich malts and using Chinook - a good bittering hop, and Cascade - a good finishing hop giving bittering and aroma. So there I was in the Lord Nelson, it's natural habitat, with a pint all ready to go. I've had a few of these lower strength beers and found them a little hit and miss but had heard good things about this one. I wasn't disappointed. It pours a beautiful reddish-copper with a thin off-white head. The aroma is a slightly spicy and musty pine and orange, very inviting. Light and zingy over the tongue, it has that distinctly Adnams salty tang followed by quite a heavy resinous pine and citrus taste. It may have been the sea air getting to me but the image that came to my mind was of waterlogged driftwood floating close to the shore, and there certainly was a hint of wet wood. Bitterness and a touch more saltiness sweeps in afterwards before washing away to leave a slightly tart finish.
This is a wonderfully accomplished and full-flavoured beer irrespective of its low abv. It's taste is most definitely Adnams and it is most defiinitely a beer that you could and would want to drink all evening. My only regret is that I didn't pick up a mini-cask from the shop. I will next time!
Cheers!