I've been meaning to do another Brupond beer review for a while, however the fact that I hadn't was brought sharply into focus when I was alerted to this at the end of last week by both @jamesbwxm and @liberty_bear. I had heard a week or so before that the beers were no longer going to be bottled but the news that that the brewery was to close due to unforeseen circumstances saddened me.
Brupond were the first new London brewery that I featured in this series when I reviewed Tip Top Hop back in April and while the taste
didn't quite deliver on the promise of the aroma I assumed that I had either a rogue bottle or at least one from a rogue batch. If you read my review then you will note that I published it the week before the 'Opening Event'. I later found out in conversation with Dave (Brassfield - founder, owner and brewer) that he was concerned that this review would adversely affect attendance at the festival, as far as either of us could ascertain then it probably didn't so I feel perhaps a little vindicated that I didn't deplete his exposure on the day itself. 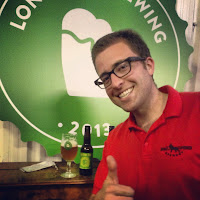 Following my review I became engaged in some good-natured twitter and e-mail conversation with Dave which culminated in us meeting at the infamous (or famous - depending on your experience) Londons Brewing festival at London Fields brewery on Saturday 4th May. I had a ticket for the evening session and as Dave was giving a tutored tasting of his beer then also it seemed an ideal time for our paths to cross. After some 'where are you?' tweets and us exchanging mobile phone numbers we managed to locate each other in an area where we could have a decent conversation. I was immediately impressed with his enthusiasm and passion for his beer and his brewing, explaining to me the pitfalls that he had come across moving up from home-brewing to trying to replicate the same beer exactly on a much larger scale, whilst at the same time coming to terms with brand new equipment. In addition to this however, and much to my delight, he had bought along a few bottles of Tip Top Hop for me to try. Tasting it in as near to prime condition as I could at that time I found that it was transformed, the taste matched and complimented the aroma of peach, pomegranate and elderflower adding to these some wonderful orange and lemon caramel running all the way through it. He had convinced me.
I have to say that others I was with weren't quite so sure, but he left me with the impression that here was a man who was trying his hardest to learn from his previous mistakes and get it right, and consistently too.

So, onto tonights beer. Now if I see a beer called 'The Belgian Farmhouse Experiment' I'm expecting a saison, and seeing as there some rather fine ones out there at the moment I'm anxious to see how this compares.
It pours a cloudy glowing lighter orange colour with quite a spritzy near-white head, but this quickly fades to a thin ring of bubbles around the edge of the glass. The aroma is surprisingly tart, curacao orange and crushed coriander seeds loom in front of a peppery lemon background and there are some sour notes in there too. Bitter and a little eye-watering over the tongue it has a big curacao orange flavour, all tart and sour with some white pepper character too. The finish fades into a doughy citrus yeastiness with that crushed coriander seed I detected in the aroma coming through right at the death to give a touch of bitter orange oil.
This is actually not bad at all. I happen to like beer with sour and tart flavours, they are both challenging and refreshing adding different and unexpected character to saisons and 'sours' particularly when done subtly and with panache, however I'm left with the feeling that what I'm tasting here is more by accident than design. It doesn't quite seem to all fit together properly and I'm not convinced it was what was originally planned.
I'd like to wish Dave well wherever his path takes him next. He is a genuinely nice chap and deserves every success.
Fare well my friend.
Posted by Justin Mason at 21:01 3 comments:

So it looks like I've reached number fifty in this series.

When I started it off a few months ago I really had no idea that I would go on for this long, but with the feedback I've had from people I respect I think it will be going for quite some time yet. The beer coming from our nation's capital currently is of the highest order, I have quite a lot of bottles in stock the new stuff, and the new breweries just keep coming and coming.
However for this half-century of reviews I've decided to go with this, the latest offering from Weird Beard Brew Co. Single Hop Series (number three if you're counting - the Nelson Saison was number two) for two reasons.
The first is that the Weird Beard beers are a bit of a crowd pleaser so I suppose that you could say that I'm pandering to that a little, however they are producing some of my favourite beers right now so perhaps you can forgive me on that score.
The second, which I'm sure your also aware is that today, August 1st 2013, is #IPADay, so it's a beer that fits that criteria rather nicely too.
The Amarillo Belgian IPA is based on an award winning homebrew called Roaring Queen (I'm quoting and elaborating from the bottle here as there's currently not much info on their website as I write - now even a picture of the label). Belgian beers aren't normally known for the overt hoppiness of their beers but with new breweries such as De Dochter van de Korenaar and beers like Brasserie lefebvre's Hopus this is changing slightly. The Amarillo hop is one that you will have come across before so without further ado, and because I'm can't wait to see what this tastes like, I'm going to open the bottle. I picked this little beauty up from Ales By Mail yesterday and it's still on the site now, but I suspect it won't be for long.

It pours a beautiful golden orange, deep juicy and vibrant it positively glows with juiciness, and with it's fluffy off-white head on top it grabs you by the cheeks and forces your nose (well it does mine anyway) into the glass to take a long hard sniff. What an odour it is too. It's big and juicy with oranges, lemons, lychee and limes, but there's also a faint medicinal edge like the mentholatum (deep heat) smell  that I remember from the rugby changing rooms of many many years ago. Initially soft on the lips, it bites hard as it hits the tongue releasing a huge juicy explosion of lemon, lychee, watermelon and mango, and in fact it's completely overwhelming in its beauty and flavour but it doesn't last long and fades into a gooey, stickiness as the Belgian yeast asserts itself and guides it down a more traditional path. I say traditional, but with all that juiciness it has much more of a citrus fruit edge than you would normally expect to find. It tails off rather politely with some lovely sweetness, slowly drying but never losing that fruity flavour. I picked up a little of the alcohol at some points, it is 7.5% after all, but these were never the same points twice which was a little beguiling, and the further down the glass I drank then the less pronounced this became before gradually disappearing altogether.
I know that whatever I write that you're probably going to want to drink this beer, particularly if you've got this far into my review. Rest assured, you certainly won't be disappointed.
Posted by Justin Mason at 20:18 No comments: