Opting out of the Hype P A ? 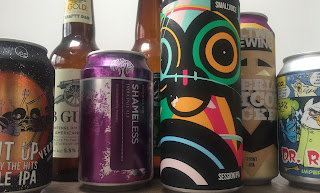 I know I haven't written much for six months or so but it doesn't mean I haven't been drinking much beer, and I'd hazard a guess that during that time at least sixty percent of the beer that I've consumed were IPA and US-style (in all their incarnations) IPAs at that.

Good old ubiquitous IPAs, those big hoppy hits of dry fruity goodness ready to wreak havoc on your tongue with their big bold bitterness, the beer that, it could be argued, were responsible (although let's not forget Pale Ales here) for changing the game and mobilising the masses to drink what we npw universally call craft beer. Who wouldn't want to get their lips round something that actually tastes, and not only that but is actually incredibly and deliciously full flavoured ? Who wouldn't want to go into a bar and see tap after tap full of these glorious brews, each one the very latest up-the-minute and freshest (well, maybe) example of that particular brewers endeavours ? You wouldn't want to miss out on that one beer that absolutely every beer writer, tweeter and their dog have been raving about would you ?

Well you might, and that's neither here or there as this isn't a post about how I'm fed up with drinking IPAs. No, not at all. I'd be lying if I said I still don't enjoy that wonderful smack across the chops you get from a perfectly crafted, fresh-as-you-like IPA, and I'd have to say that my brewery of choice for these amazing beers time and again is still The Kernel, and it their constancy and consistency that keeps me reaching for those understated brown labels, obviously with half an eye on the "Bottled On" date. Well you do, don't you? 'Best Drunk Fresh' is an IPA brewers mantra.

What I've been experiencing recently, and I'm referring mainly to canned beer here, is that the vast majority of the IPAs have been, well, very samey. I found it hard to distinguish between them, and they weren't particularly memorable. They certainly weren't bad, but perhaps a little bit, maybe more than a little bit, homogeneous.

(Side note: I was hypothesising with some purveyors of fine beer recently that if these same breweries and I don't have name them, you know who they are, started brewing and canning Mild what the effect would be.)

To be clear, I'm not talking about extreme style variants here, I've noticed Sour IPAs starting to appear recently (haven't we seen them before, or am I imagining that?) and Coffee IPAs have been a thing for a while, but I will clump together Session IPAs and DIPAs in with their older sibling.

Can you place your top five IPAs that you've had over the last three months ? Possibly, but if I asked you to place your top five from those that were released as brand new onto the market in the last six months then I'm willing to bet that you'd have a much harder time. Of course you would, it's a ridiculous thing to ask, these are transient times where this weeks big beer will be forgotten next week as there's always something new. It's all about the new, the most up to date, the next big hop, the latest technique, the next can design, and not being one of the first to try it, or at least not missing out, isn't it ?

Recently I was fortunate enough to be invited along to record a show with Steve and Martin from the Beer O'clock Show that featured beers from Shane Swindells at The Cheshire Brewhouse that were brewed using a recipe dating back to the 1800s as well as hop and malt varieties dating back over fifty years. If you haven't heard the episode you can find it here should you want to. But any notion that I had of beer being so much better in this day and age, although admittedly these aren't the actual beers drunk in days gone buy, were certainly dispelled. I'd advise you, if you haven't already done so, to check out their beer and see, or rather taste it, for yourself. These are IPAs from the old school. They're bottle conditioned, so treat them with the respect they deserve, but they'll repay you with some of the best beer you'll have had in some time, guaranteed.

I've been hearing and reading about some murmurings around the price of craft beer, not exclusively targeting IPAs but they have tended to be squarely in the firing line by virtue of the fact that they seem the most common. I'm going to ignore the indignant outrage at the £13.40 pint last year as micro-storm in a third glass, but on the whole beer has become more expensive to make by virtue of it's popularity, it's basic supply and demand, and if you include an expanding brewery's costs growing outside of the actual product then, on the whole, I'm happy to pay for it, but only when I really want to. Before the UK's craft beer explosion there was, believe it or not, some amazing beer out there in pubs up and down that country, and a lot of that beer is still with us, it just hasn't been getting much attention of late. Cask Conditioned Beer and Real Ale aren't dirty words to be spat out with venom and disgust (although the term 'Real Ale' does sound rather trite to my ears these days), they are still things of beauty, of wonder and delight. In these days of New = Best, and the next new one will be even better, let's not forget those beers we remember as being really good but we don't touch because they've been around awhile. My local, The Spread Eagle in Brentwood, Essex, has Sharp's Atlantic, perfectly sessionable if a little thin, along side Fuller's London Pride and Titanic's Plum Porter, and has done for some time. All three are drunk and replenished within a few days by a pub of mixed clientele of all ages who just want to drink good beer, and know it when they find it.

To conclude, I'm not opting out of IPAs or denigrating them in any way, and I'm still undecided as to whether or not I'm going to get sucked in to the talk about the next big beer. You'll have noted the question mark in the title, and there's still a part of me that loves the thrill of the chase even if the result is more often than not, a bit of a disappointment. I'm just being a bit more wary, a bit more discerning, and a bit more focussed on other beer styles, letting my gaze and palate roam where it wishes (remember when it was wall to wall dark beers in wintertime ? A part of me misses that) and maybe, just maybe, opting out of the hype P A.

Footnote: The IPAs in the photograph are just what happened to be in my fridge at the moment, so you'll note that they are beers that I chose to buy and enjoy. I'm not telling you to buy them or otherwise, you'll have to make your own mind up.
Posted by Justin Mason at 14:29 No comments: