The Gidea Park Micropub is almost opposite The Ship in Gidea Park, just outside Romford (see my previous post) and my first visit was towards the end of the extended ramble around my past haunts that I know was a rather long read. It's the kind of place, unlike some of those I encountered, that I knew that as soon as I walked in that it wasn't going to be my only visit. It wasn't, and this post was written over the two visits so far that I've made, and my experiences of both. I  hope that it unwinds in a coherent way, let's find out. 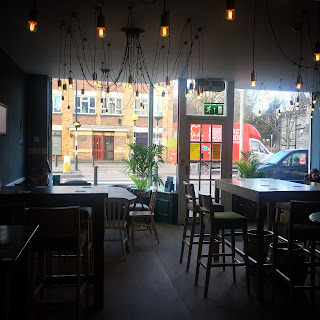 Looking around the room as I enter I'm approached by a bearded gentleman in a CAMRA t-shirt who shakes my warmly by the hand. Enquiring as to where the bar is he informs me that there isn't one, and the beer is kept in a room within the micropub itself. Looking up at the board I opt for a pint of Tinkers Cuss from One Mile End and settle down adjacent to the dart board, which occurs to me as a rather dangerous thing to have, and not something that I remember coming across in micropub before.

When I go to a new pub on my own I like to take in the feel of the place with my first drink, and in some places I ascertain quite quickly that it will be my last, but not here. There are a group of lads occupying middle table animatedly discussing giving up smoking and running the London Marathon, but it's not threatening and I sit there contentedly with my beer, which is by far the best kept that I've had today. 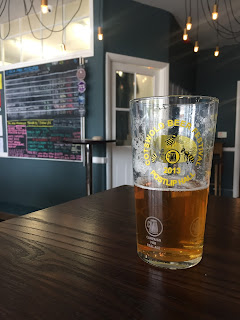 Looking up I notice the bearded CAMRA man going into the 'inner sanctum', a room towards the back of the pub. Peering around the door I spy a fully stocked bar in there, with wine glasses and bottles all lit up, but he swiftly closes the door behind him before I can get a proper view.

Upon his return, and my pint finished, he asks me if I would like another. I decline ath this point as I want to go across to The Ship for a swift one, but promise that I'll be straight back. He introduces himself as Steve Powell, and I tell him that I'll be back for a chat soon.

When I get back from The Ship, I order a pint of Empire's Dangerous Dave, and slip into easy conversation with Steve.

Gidea Park Micropub was opened on the 21st of December 2017 on Main Road, it is owned by Trevor Howard who has previous experience at a number of local Wetherspoon pubs, including the Moon and Stars in Romford, The Barking Dog in Barking (a pub I didn't go in on my travels), The Lord Denman in Dagenham Heathway (now closed) and The Collie Row in Collier Row. Fed up with Wetherspoon's local management structure and internal politics he decided to leave, and when the opportunity of managing a micropub arose after conversation with Dave, he seized the opportunity. 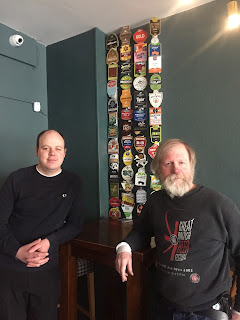 Steve tells me that he himself still does some shifts at The Collie Row, and as we talk I forget my notes and all too quickly it's time for me to leave.

Less that a month later, on a bright Monday afternoon, I'm back in Gidea Park. It's less that half an hour away door to door, trains permitting, and as I'm at a bit of a loose end it seems silly not to.

I arrive just after midday, its normal opening time, but I'm not the first customer of the day, just. As I pause to take a picture outside, a man I'd estimate to be in his late fifties tries the door and goes in before me.

Inside I order a pint of Big Hand's Little Monkey as my first drink of the day, a pleasant chocolatey Mild, and the first I've had from this Wrexham brewery. I make myself comfortable at one of the larger tables, perfectly happy with a little solitude as I go over my previous notes and begin to write.

The first pint slips down rather easily, thirsty for another I get a pint of Maxim's 7Cs and a packet of dry roasted peanuts. Light and hoppy, it's a perfect foil to the savoury peanuts, and I'm rather pleased with my choice.A suited gentleman comes in and enquires about food, but the crisps, nuts and pork scratchings on sale here aren't enough to tempt him, so he quickly leaves in search of greater sustenance.

On my first visit I noticed that there was a variety of beery reading material available, with copies of Ferment magazine and London Drinker in cardboard stands, but I pick up a copy of Mersey Ale to peruse, the Liverpool and District CAMRA magazine, and it gets me thinking that a visit to Liverpool might not be a bad thing to do sometime soon.

Pondering my next drink I spy a scrawl on the the blackboard stating that since opening that they have had 129 different beers from 66 different breweries, which strikes me as a rather respectable amount in just over 3 months. 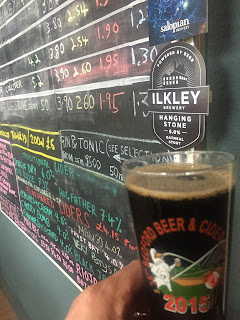 Super Collider from Salopian is my next choice, its tangy hoppiness a real delight, and, three drinks in, I find that I'm rather enjoying my free afternoon. There's a lot to be said for killing some time people watching in a pub of any kind, and the blissful ambience of the micropub is rather relaxing.

It's a little busier now, a couple of retired gentlemen are discussing mutual friends Steve, who I met on my previous visit, is engaged in conversation with a recent arrival in an anorak who has ordered a pint of Ilkley's Hanging Stout. It looks rather tempting and I decide that this will be my next and possibly last drink here, the time having disappeared so quickly.

Hanging Stout it is, thinner in body than I was expecting but with a lovely malty chocolate finish. I have a half, and then another, followed by a third, as I pick up on the conversation with Steve and the man in the anorak, who introduces himself as Kevin. These are some of my favourite times in a pub, heated debate about dispense methods and breweries as another hour or so slips by.

Once again I have to leave, but as before I've thoroughly enjoyed my time here. The gravity dispense beer is in excellent condition, and turns over very quickly, new beers came on and old ones off in both of my recent visits. Fridays and Saturdays are rather busy I'm told, so I'll have to get back there to see what they're like, hoping that there's not a darts match in progress. That would make things rather interesting. 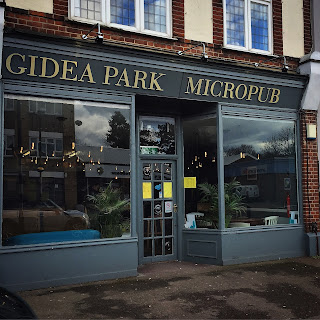 Gidea Park Micropub is located at 236 Main Road, Romford, RM2 5HA and is open every day of the week from 12-11pm. It's less than five minutes walk from Gidea Park station on the Cross Rail link that currently runs out of Liverpool Street. It can be found on twitter at @gideaparkmicro . Although not strictly in Essex, Havering is a London Borough and was previously a Royal Liberty, it is worthy of a mention and a visit for its accesability, friendliness and superbly kept beer. Give it a try.