A Beer With No Soul?


A Beer With No Soul?

"... that's why I'm pissed off now, especially by United States customers, they don't give a shit when InBev is buying another company, for them it's the same. No! Goose Island is not a craft beer, come on, that's how they kill the Belgian markets. The Belgian market almost died to that kind of stuff. It was InBev policy for almost thirty years, buying up opponents, now they are doing it worldwide. In Italy, the day they bought Del Borgo I called friends, Manuele in Roma, I called Stockholm, and said "Guys, we have to move!",  but we were not ready. But if I have some time this year I hope I can get a group of people to get ready for the next strike. We have to strike back. That's how they destroyed Belgium, buying breweries. As soon as somebody is getting better, buying it. Buying it to do what? Produce the same shit everywhere, so it has no soul."
Jean Hummler of Moeder Lambic in conversation with Breandan Kearney.
The Belgian Smaak Podcast, EP007

It's a warm Monday evening, and I'm in hipster-central Shoreditch for another beer launch. As it's on the way I stop off at BrewDog, meeting Matt Chinnery (the Half-Pint Gentleman) for a beer or two, returning our glasses to the bar before heading a few doors down to where Goose Island has a pop-up bar ready to launch Migration Week in London for the second year in a row. Migration Week, to quote from the promotional blurb, "The Chicago Brewery will be showcasing the wide range of beers in the Goose Island portfolio at a variety of diverse events across London, where beer lovers can embrace the spirit of Chicago in the capital from 12-17 June." 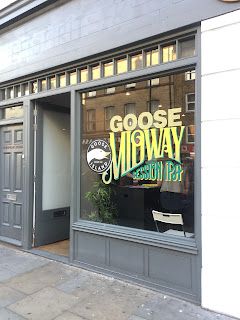 The invite tonight was for the launch of Goose Island's newest beer, Midway, a 4.1% session IPA showcasing American hops.

It's a tasty beer too full of big hop flavour, but not too bitter. There's notes of lime, lemon and orange, a full on sessionable citrus hit perfect for summer drinking. It slid down very easily and had three or four in quick succession, which wasn't actually as quick as you might think given the plastic glasses it was served in, which appear to be almost compulsory at every non-brewery-based event at the moment. A side rant here but, come on, they're not easy to drink from  nor are they eco-friendly, and if you're really worried about glass and injury then just make sure you have enough staff that know where the dustpan and brushes are kept.

We had a good night, and the guys at Goose Island were particularly generous with plenty of beer flowing and some very good food and, if you allowed yourself to get carried away by the blues riffs played by the over-loud band, you could almost forget that the whole thing was being bank-rolled by ABInBev.

It's a PR stunt, but nothing new there, that's what these launches are all about. Whether you're a big multi-national or a small local independent, it's all about getting your product out there, getting it talked and written about, creating an interest.

Goose Island do these events really well. I've been to quite a few of them now and they tend to bring out the great and the good in the beer writing community, particularly when the Bourbon County bandwagon rolls into town.

They are a real celebration of Chicago beer culture. Except this one wasn't.

You know this, it's an ABInBev beer, and you yawn and switch off. I wouldn't blame you, this has been a broken record since they were bought be ABInBev in 2011, and on the whole it's now accepted that if you choose to buy it then you tend to know what it is. It's what's become known as "crafty" and the examples are endless.

Goose Island Midway isn't a Goose Island beer because it's brewed by Birra del Borgo in Italy. It can't embrace the spirit of Chicago because it has nothing whatsoever to do with Chicago. It is a fraud, a beer pretending to be something it isn't, riding on the reputation of an established, better known brewery that's really just a front for a multi-national. It has no real identity, it's the bastard child of marketing men and brewers, spawned ultimately by those who, for their own reasons, took the big money from The Man. There is no story other than profit, there is no passion, there is no soul.

Goose Island Midway was described to me as a "game changer" by a representative of, get this, ABInBev's Craft Division, (a frightening development) and it is. For the first time that I can recall a really tasty new beer that wasn't a limited edition or one-off, not a dumbed down half-hearted flavour-challenged attempt, has been produced under the guidance of ABInBev. It appears that they are learning, should we be worried?

Referring again to the Breandan Kearney's excellent interview again, it won't be long before they'll be producing the same shit everywhere.

Does anyone know where ABInBev have recently invested a lot of money in a state of the art brewery in London recently?


You can listen to what Jean Hummler of Moeder Lambic has to say on the Belgian Smaak Podcast here, and I'd strongly recommend that you do. All of these podcasts are pure gold if you have any interest in beer, particularly Belgian beer, at all.
Many thanks to Matt Curtis who allowed me to crystalise the ideas for this post by messaging me regarding the beer the day after the event. Thanks mate.
Posted by Justin Mason at 16:17 No comments: 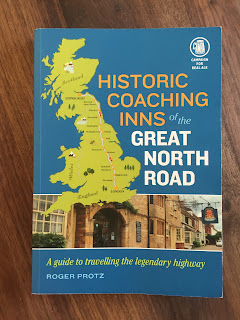 I'm a sucker for old inns and I don't mind admitting it. The anticipation of approaching, the resolute beauty of the exterior and, crossing the threshold, the palpable sense of history as I join the ranks of patrons that have enjoyed the hospitality within the self same walls through centuries past.

All human life has frequented inns through the ages, from paupers and beggars to kings and queens, from murderers and thieves to bishops and knights of virtue, itinerant traders, drovers, servants, writers and politicians, each seeking companionship, solace, sustenance, warmth and rest according to their needs. Inns have been court rooms, prisons, breweries, brothels, meeting rooms, places to plot, plan, philosophise and ponder life's mysteries, as well as providing inspiration and material for playwrights, poets and authors. The stories their walls could tell are many and varied, from joyful and jubilant to morbid and melancholy with every emotion inbetween. This is what I find so fascinating about them, this is why I love them and this is the reason I visit them. For me, surprisingly, a good beer is a bonus, and whilst not essential it often means that I spend longer soaking up the atmosphere than I had perhaps intended.

When CAMRA sent me this book to review I had a feeling of both anticipation and trepidation. The subject matter had obvious appeal, but I wanted to be taken on a journey of imagination along an ancient road, touching on history enough to peak my curiosity, while also providing just enough of a contemporary review that I'd long to explore these places for myself. A tough ask maybe, but fortunately this, on the whole, is exactly what this book delivers.

Those of you that have read some of the many books that Roger Protz has written will be familiar with his narrative style and he sets the scene and historical context that lead to the rise and demise of the coaching inn, before setting off from London to Edinburgh on a journey that follows the old Great North Road, similar in the most part to the route of the  A1/A1M, but taking in the towns and cities that the modern road now bypasses so as not to inconvenience today's road users. The chapters are written in stages so that it isn't a monotonous list of inns, and these are interspersed with jolly asides on subjects relating to coaches, highwaymen (and women), and road builders, as well as providing guidance to other places of interest in the area of each stop. It's clear to see that this was a genuine journey and an enjoyable one at that.

As you would expect in a CAMRA book the beer available in each is mentioned, but this is more in passing rather than a dominating factor, and it's not only real ale that gets a nod, although it is most certainly available in every inn that has an entry here. I would have liked a signpost to other coaching inns in the area that don't carry cask beer but that is purely a personal indulgence and in no way a criticism, it just means that I'll have to do a little background reading if I visit these places so as not to miss out on an historical gem.

I confess to have already visited many of the inns written about here, the Dukes Head in Highgate, the George in Stamford, the Angel and Royal in Grantham and the Olde Starre in York being particular favourites, and am pleased that I feel the same about each as Roger does, finding his insights both interesting and insightful.

If this book has a fault it is that, for me it doesn't go deep enough into the area and history of each place and how it related to the coaching era but this isn't really it's purpose, and that I find some of the picture placement a little confusing as the inn exterior tends to be shown at the end of the piece next to the following entry. What it does provide however is enough of a starting point to pique your curiosity should you have any interest in coaching inns, historical buildings, or are just in search of a beer related diversion.

This isn't the definitive book on the subject, at some 192 pages you would not expect it to be, but it is the ideal book to pack in your glove box or back pack should you wish to set off on a journey of discovery into this country's past and the history of beer and travel.

Historic Coaching Inns of the Great North Road by Roger Protz is published by the Campaign for Real Ale Limited and is available through CAMRA books with a registered retail price of £12.99 although with a little shopping around you should be able to get it cheaper than that. I've already mentioned that this book was sent to me for to review for free, and even though I confessed my love of inns in my opening sentence if it was awful I wouldn't have hesitated in saying so. It's not, and I thoroughly enjoyed reading it.
Posted by Justin Mason at 09:03 No comments: