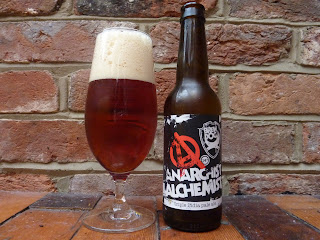 Hype. BrewDog. Two words that are synonymous with each other. BrewDog do hype, and they do it well. Love them or loathe them they are out there, blowing their own trumpet and brewing some great beer and some, well, not quite so great.
Anarchist / Alchemist is a (hype-alert) Triple IPA, triple-hopped with Centennial, Cascade, Columbus and Chinook (one of my personal favourite hops) and with the volume turned up to 14 (%) to mis-use the well-worn Spinal Tap cliche. If you want to read what BrewDog have to say about this beer you can do so here , it's available to buy on their website as I write, but I'm going to look beyond that and actually taste the thing.
As I opened the bottle there was a real hit of pine and citrus immediately, in fact it seemed like it was almost as I touched the cap with the bottle opener. It pours a dark copper colour with an off-white head that billows then fades to a sustained white disc atop the beer, which I was surprised at given it's strength as often with beers over about 8-9% any head collapses due to the alcohol content. Sticking my nose in the glass I get more big pine aroma but with some sweet peach, lemon sherbert and peppery orange marmalade. There's a hint of alcohol dryness, but only a hint. On first sip, sharp at the tip of the tongue, a myriad of flavours come crashing in. Some sweet, some sour, all intense. This is a very complex beer. Tangerine, orange peel, peppery spiciness are up first, then some sticky gooey-sweet caramel envelopes it. A touch of pear juice and a little tartness like sour apple is followed by some dry yet sweet and juicy tropical fruit. The finish is long and almost chewy with tropical caramel flavours dominating. I really expected the flavours to get lost in the alcohol and thought BrewDog would emphasise the 'booziness' of this beer, but this is not the case at all.
When I started writing this review I honestly didn't know which way it would go, but I was sure I was going to be totally honest about the beer. If I'm straight with myself I really expected some fizzy big-alcohol hop juice, overwhelming in it's dryness. How wrong I was. This beer is simply wonderful.
I'l use, and extend, another music reference (this time from Public Enemy) to finish:
Don't believe the hype. Believe the beer.
That says it all.

Posted by Justin Mason at 21:28 No comments: 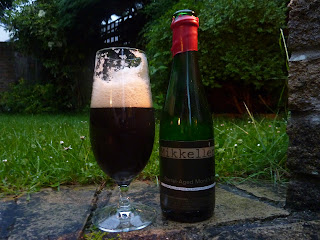 It's Mikkeller time again, however this time it wasn't (directly) by my own choosing. This was another Twitter Beer Roulette choice, this time chosen by @TheRealC_BAS .
It is the red wine barrel-aged version of Monk's Elixir, a 'heavy dark Belgian ale inspired by the Trappist monasteries of Rochefort and Westvleteren'.
As soon as the wax-sealed bottle is opened there is a big hit of red wine, more precisely the deep blackcurrant smell you get when opening a bottle of Cabernet Sauvignon. In the glass it pours a deep ruby red with quite a lively beige head that billows and initially fills the glass before settling down to a light dusting. More of the black currant aroma but with some vanillins that you would expect from a barrel aging, and I'm guessing this was in oak. Hints of liquorice and black cherry flirt around the nostrils enticingly too. Surprisingly light over the tongue, I suppose I was expecting it to be a little heavy like a big red wine, but it's not like that at all. More blackcurrant in the taste but also with more cherry and the merest notion of caramel. A dry bitterness sweeps fleetingly across the tongue like a sharp deep dark chocolate brush-stroke before the blackcurrant returns with it's former intensity. The finish is very like a red wine, fruity with a little oiliness - which wasn't there earlier, although expected - dry and ever so slightly cloying before some lovely spicy (basil!) vanilla notes dance around on the tongue at the death.
Another astonishingly good beer from Mikkeller, with both intensity of flavour and lightness of touch. The way it is both a wine and a beer is really incredibly clever and I would expect many wine drinkers to be fooled by this. Excellent.

Posted by Justin Mason at 21:46 No comments: 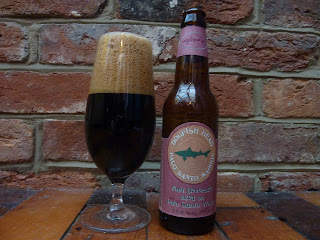 So what's this all about then ? Twitter Beer Roulette !
It's quite simple, and you can play it too.
Last night, possibly due to laziness, or maybe due to ... no, it was laziness, I couldn't decide which beer I wanted to drink. I posted up some criteria on Twitter, and I was lead toward a Bear Republic - Hop Rod Rye by fellow blogger and general good bloke from Norwich, Mr Nathaniel Southwood.
Tonight however I took it in stages as I wasn't sure where I wanted to go.
First up was which part of the world, quite generally, that I wanted to explore from what I had in my collection: British, American or European?
Mr Chris Dixon @ckdsaddlers responded first with USA. So far so good.
Light or Dark?
Dark.
Hoppy, malty or weird?
Weird!
So weird it is, and as weird goes, Dogfish Head do it rather well.
Palo Santo Marron is essentially an American Brown Ale but it is aged in a custom built 10,000 gallon wooden tank (made from exotic Paraguayan Palo Santo, or 'Holy Tree' wood), and is the largest wooden brewing vessel built in America since before Prohibition. It's unfiltered too.
It pours a beautiful deep dark brown with the faintest hint of deep port-like red, and a fluffy light brown head which settles down to a souffle consistency over the beer.
Lots of coffee and boozy chocolate with vanilla in the aroma, and smooth and richly untuous over the tongue. Caramel, dark chocolate toffee flavours burst forth melting wonderfully into a rich port wine. Astonishing. There's some liquorice and even some brackish herbal notes which aren't in the least bit unpleasant. The finish is a long, lingering coffee caramel port toffee. Sweet, lush and warming, hardly surprising given it's strength.
I have never had a beer aged in Palo Santo wood, but I certainly would love to try another. It seems to impart a rounded richness and I was unsurprised to learn that it is used to age wine in South America, and also for incense burning sticks.
So you might want to try Twitter Beer Roulette and see where it leads you, just make sure your criteria have beers within your reach. You might find an unexpected gem.
As an aside, Mr Dixon also suggested Pantera's - Primal Concrete Sledge as a musical accompaniment, but adventurous as I am in beer I'm afraid I can't quite stretch that far, however I will admit it kind-of works.
Cheers!

Posted by Justin Mason at 21:57 No comments: