NIL BY MOUTH
Musings during an enforced break from beer

"Prohibition makes you want to cry into your beer and denies you the beer to cry into" Don Marquis
I have the flu and I wish I didn't. If you've never had flu then consider yourself lucky, it's knocked me flat on my back for over a week, and it's not pleasant at all. I won't go into the details of my symptoms, nor do I want any sympathy however I have had plenty of time during my unsolicited sabbatical to think about beer, drinking, and my relationship with it.
Before you throw your hands up in despair wondering if I've gone teetotal or if I'm going to go on some sort of anti-beer introspective then don't worry, I'm not. It's more a case of examining what I get from beer personally and sometimes a clearer and more complete view can be seen from a distance. It has also meant that I'm having to put off finishing my review of the excellent beers from Brewers and Union for another week which I'm a little miffed about. Incidentally before I leave the whole beer and illness thing totally behind, some of you may be interested in an article I came across concerning an anti-viral compound found in hops. 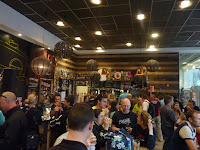 The first thing I'm missing, due to being confined to my bed and having no company is the social aspect of beer. Beer more than any other drink brings people together, most traditionally of course in the pub, but more recently you can 'share' a beer, or a least the experience and enjoyment of what you are drinking while sitting by yourself with a glass of the good stuff in your hand. Social media being what it is, thanks to twitter, Facebook and via application software (apps) such as Untappd you can rate and review the beer you're drinking which in turn others can pass comment on, whether requested or otherwise, in a way that would never happen in your local boozer. Sure, you might find the pub bore telling you in detail about the beer you're drinking and what they thought of it, but quite often their opinion is uninformed and irrelevant to you at the time. The good thing about 'drinking online' is that these opinions can come from friends and acquaintances from all over the country or even the world, and occasionally from the actual brewers themselves, and if you don't agree then it's fairly amicable, it's just a difference of opinion. There are of course a few cross words and heated exchanges, but there aren't many black eyes. The bruising is generally confined to egos. Extending the concept of shared drinking online, for a twelve week subscription Beer Bods send you a box of twelve beers, a designated one of which is tasted communally and discussed on twitter via #beerbods every Thursday evening at 9.00pm. Each opinion is just as valid as any other with many participants, male and female, discovering new beers and new styles with the discoveries of fresh palates offering new insights into sometimes familiar beers for even seasoned drinkers.

One aspect of beer that I particularly enjoy is that I find it relaxing. I don't need to have a beer to relax, I find reading, walking, writing and even ironing (don't tell anyone though, we all have an image to maintain) help me unwind, however sitting down with a glass of beer, discovering, unpacking and analysing it's tastes, flavours and textures is something that I find quite therapeutic. Utilising all the senses (including touch - the glass doesn't pick itself up!) as well as the brain, picking up aromas and combinations of flavours at different stages of the beer, firing synapses that trigger memories and emotions, it can be an all-consuming and nostalgic experience at times. Drinking too much is anti-social and damaging, anything taken to excess is never a good thing as we are constantly reminded by the media, but taking your time over a decent beer can be quite satisfying. Remember that the brewer has taken time and effort to give you an experience of flavours to a particular end, surely the very least we can do is take some time to explore and examine the beer as an acknowledgement of that effort.

Beer has been a part of my life for as far back as I can remember, and I was fortunate enough to be introduced to good beer in my late teens and early twenties. This at the time meant Eldridge Pope's Thomas Hardy's Ale, Worthington White Shield and Budweiser Budvar in bottles, cask beer from Mauldons and King & Barnes, and the experiences of numerous beer festivals, all dutifully recorded on slips of paper and then later transcribed into a book purchased for me by my then girlfriend (now wife) specifically for that purpose. I suppose it would be called 'Beer-ticking' now but acquisition was never really the name of the game for me. Don't get me wrong, I was always on the look out for beers that I hadn't tasted particularly as brewers started to experiment with themed and seasonal ranges, but for me the actual recording was the thing. I can look back at my records, some detailing beers I had over twenty years ago, and although I've only noted the Brewery, Beer and ABV they can bring memories flooding back of the time and place I drank it on a considerable number of occasions. I have bags of beer mats, scrapbooks with beers labels in, pump-clips, ash-trays and assorted breweriana, boxes of beer glasses, ties and t-shirts, programmes, magazines and enough books on the subject of beer to open a small shop, and to me they all mean something. Of course there's a large element of nostalgia here and I don't keep everything, having two children I soon realised that wasn't practical, but all this retrospection I've mentioned is only part of the picture as I'm also constantly scanning the horizon to see what's coming next. While maintaining a foot firmly in the past I'm most definitely facing forward. We cannot and nor do we particularly want to return to those days of pubs closed in the afternoon, with poor choice and poor cellarmanship simply accepted as par for the course, so it's time that I removed my rose-tinted spectacles and put them back in their case as that's about as far as I want to go back in time. I shudder to think that I'm going to become the bore in the corner starting his sentence with the words "Back in my day ...". It's ok to discuss the past, but it's not ok to live there, a lesson I think some of us need to be reminded of every now and then.

By now you'll have worked out that I'm missing beer, but that's only part of the story. Hopefully I've shown how it's not only the drink itself that I'm yearning for but also the conviviality and esprit de corps within the beer fraternity however loose that association, the companionship and atmosphere of the pub and friends therein, as well as the relaxation and mental transportation involved in the process of drinking. The doctor has told me that this virus could last for up to four weeeks, but I'm determined to be over it before that, and while drinking may be off the agenda for a little while yet I've found writing about it quite therapeutic. I didn't want this enforced break from beer and while some may say that it has done me some good but by the way I'm feeling at the moment I could definitely argue otherwise, at least physically, however I have the strangest feeling I've just reviewed a particularly fine bottle. Odd. I hope that those of you have read this far have understood my inane ramblings and maybe empathise a little, and if you have anything to add I'd be delighted to read it, in fact I'd actively encourage you to comment. It's no fun being ill and it will give me something to read.
Enjoy your beer, hopefully it won't be too long before I'm enjoying mine.
Posted by Justin Mason at 17:41 2 comments: