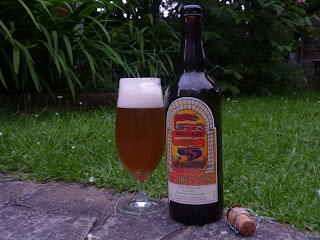 So, it's the final of Euro 2012 as I write. Spain have taken a 2-0 lead over Italy and rather than take the obvious route and have a beer from one or either of the finalists I have opted for a brew from France, or more precisely Normandy, but with a peculiarly English twist.
Le Brewery was started by Steve Skews, a commited home brewer, in Joue-du-Bois, a commune in the Orme department of north-western France, in 2001. Hop rhizomes from Kent and Hereford were planted and the 10-barrel brew plant started producing a range of beers taking inspiration from the Norman Conquest and using label imagery based on the Bayeux Tapestry. There are currently 7 beers in production according to the website and I recently picked up this bottle of Norman Gold at Utobeer in Borough Market.
Brewed with Challenger, Cascade, and Styrian Golding hops it pours a hazy golden amber with a creamy white head from its large corked and caged bottle. The aroma of floral grassiness has an underlying lactose sweetness which is quite enticing. Quite rough and agressive over the tongue there is a big hit of wet straw and prickly light maltiness. Crisp dry apple juice and a hint of orange peel develop rather nicely before the finish crashes in with wave of drying foaminess sweeping away all the flavours that were there before, leaving a sensation of satisfied tart bitterness.
A rather different take on a Golden Ale, and very welcome it is too. I love the rough artisanal feel to the packaging and the product. It's all rather rustic which gives it lots of character, adding mental imagery to the wonderful flavour and enhancing the whole experience. I will certainly be seeking out the rest of the beers to see if they have similar characteristics.