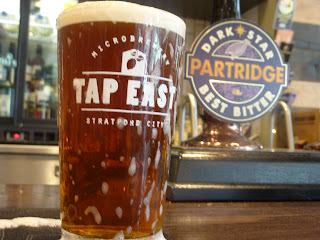 First up is Dark Star's Partridge described as a Best Bitter brewed in the Sussex Style with East Kent Goldings. The more observant amongst you will notice that I had this beer at Tap East in Stratford City in the shadow of the Olympic Stadium. The link between both of these beers is that they were both purchased at Tap East but the latter was actually drunk at home. Back to the Partridge, it pours a wonderful golden brown colour and a creamy off-white head. Malty sweet applewood notes on the nose belie a sharp malty bitterness on the tongue. Little stabs of pear sweetness break through and are most apparent on the back of the tongue and the roof of the mouth making this a wonderfully fresh tasting beer, possibly down to 'the late addition of aromatic hops'. A delicious semi-dry sweet aftertaste lingers like an early Autumn sunset. Golden brown, texture like sun, and very moreish. 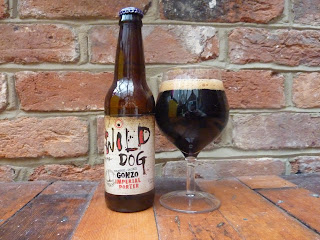 Flying Dog - Wild Dog Barrel-Aged Gonzo Imperial Porter to give it it's full title is, exactly as it states, Gonzo Imperial Porter aged for 3 months in the barrels of their neighbour Stranahan's Colorado Whiskey.It pours a very opaque deep dark brown with a light brown head that billows then diminishes quickly on pouring. There's a big oaky aroma with a sweet whiskey sweetness too. Rich and thick on the palate, the big dark oak chocolate whiskey alcohol taste disolves sweetly into a raisin and date fruitiness which is only a little dry. A light woody flavour, like walking into an old church, is dominant in the aftertaste with hints of milk chocolte, coffee and dark rum. This beer is a heady complex treat best sipped gently somewhere comfy and quiet. It is all enveloping and simply wonderful.