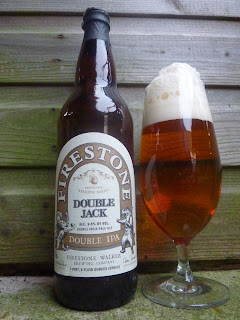 This is the one I've been waiting for. This is the culmination of the three Firestone Walker bottles and I'm a little nervous.
It's a bit odd.
I have wanted to drink this beer from the moment I bought it. I also know it's best drunk fresh - within 120 days of bottling, Firestone Walker recommend - and I'm close to the limit now, but still I hesitate.
This is a beer that many covet, often described as one of the best of its type - that being the Imperial or Double IPA. Scoring 100 overall and 99 for style on RateBeer and 94 Exceptional on BeerAdvocate it might just be rather good.
But still I have this nagging doubt.
Does it get high ratings because it is so highly prized?
Other people who've had it tell me it's good, but what if I don't think so?
Well the answer to the last question is easy, my opinion is as valid as anyone elses so that's not a problem, but at 9.5% will it be all booze and no beauty?
Well, it's impossible to taste a beer without opening the bottle, so ...
Pouring an orange amber it has a high rocky off-white head that quickly settles to a light dusting of soap-bubble snow. The aroma is a gorgeous mix of tangerine, peach, lemon and grapefruit, but whilst these are all full and fruity there's a herbal blanket lurking in the background as if preparing to cover it all and snuff it out in an instant. The deeper I inhale the more intense this herbal note becomes and it's here that I detect the alcohol, like a puppet master controlling the whole affair, or a First World War General sending out the infantry to be slaughtered whilst wallowing in luxury miles from the front line. It's oily and a little heavy over the tongue, and this is a smooth mover, sinuously slinking and easing itself down the throat before exploding a big juicy hop bomb that envelops the whole mouth bursts out of the nose. There's a hint of caramel and honey at first, always a good sign of a decent malt balance, then the hops take over. Grapefruit, tangerine, mandarin orange marmalde and roasted caramelized pineapple detonate then vaporize in a glorious juicy flavoursome soaked instant. But what an instant that is, and one that I'm drawn back to again and again. Given its high abv this should really be a sipping beer, but it's one I find myself gulping down with gusto. I'm only getting the merest hint of the alcohol that I really expected to reveal itself as the malevolent usurper taking over in a boozy coup d'etat, but it holds itself back with splendid restraint. The finish is oily orange cream with a touch of white pepper and a piny resonance in the nose. This doesn't last as long as expected sadly, fading a little too quickly, and that it really my only criticism of this beer.
The balance here is superb, and even though the burst of flavour is pretty awesome it isn't the sole element that stays with me but more the focal point of a rather picturesque jigsaw. My fears over the alcohol content prove to be unfounded and I get an inkling of what the fuss is all about.
This was the most expensive (£10 a bottle) of the beers that I picked up at the GBBF, but my only regret is that I didn't buy another. As I write this final paragraph I finish the bottle, and although I had to concede a little to my wife this wasn't done grudgingly, it was just too wonderful to keep to myself. A beer this good deserves to be shared. I wish it was more widely available in the UK and if you're ever in possession of one then invite a few friends over, get a few hoppy IPAs together and have this as the culmination of the evening. I've thoroughly enjoyed my Firestone Walker adventure and looking back at this review I note that I have waxed a little more lyricaly than I intended. I suspect that this may be due to the alcohol, finally taking me by stealth and deception after all.
I care not. To the victor the spoils, I got the beer. And what a beer it was.
Posted by Justin Mason at 19:58