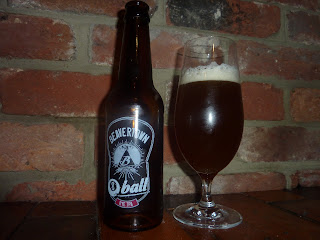 There's a bit of a buzz about Beavertown Brewery at the moment, and the buzz says that the beer is good. Very good. So when, last Friday, I got the opportunity to taste and purchase a few bottles of their beer I jumped at the chance.
I'll be reviewing the Rye IPA, 8 Ball, tonight with Smog Rocket, the smoked porter and Black Betty, the black IPA (released on 17th October) to come soon, however before I break off I'll take this as my cue (did you see what I did there?) to tell you a bit about the brewery.
Formed in February of this year (2012) by Off Broadway cocktail bar owner Byron Knight and the son of Led Zeppelin front man Robert Plant's son, Logan, it is based in Dukes Brew & Que restaurant in the De Beauvoir Town district of Hackney from which it gets its name. Beavertown is an affectionate local derivation of the name, given to it by those cheeky Cockney scamps (my old man, cor blimey guv'nor, strike a light, etc.) and caused a little confusion amongst drinkers at first.
Incidentally, for those of you with an interest in graphic design and branding I found an article in Design Week online concerning Beavertown Brewery that you may find informative.
The 8 ball is dry hopped with (unspecified) 'juicy American hops, using old pool balls to weigh the hop sack down in the beer. Hence the name.' It might also be noted, and completely unconnected, that an 8 ball is the 'street' name for an eighth of an ounce (3.5 grams) of cocaine, and also for an Olde English malt liquor usually served in a 40 ounce bottle, to quote Eazy E in Boyz N The Hood "They greet me with a 40 and I start drinking, And from the 8 ball my breath start stinking".
Hoping to avoid stinking breath this evening I open the bottle.
It pours a murky, muddy brown with a thin but sustained off-white head. The aroma is grated grapefruit peel, a little soapiness, raw bread dough and some gritty dryness, big bold and fresh as you like. It skids lightly over the tongue but pulls at the edges as though pulling a liquid tablecloth from the surface leaving all the flavour intact. And flavour it certainly has. A great big dollop of grapefruit peel mixed up with sticky oily bready mango dipped in toffee lands right in the middle of your tongue, bursting and raining down over the whole palate, ushering in a delicious wave of pineapple coupled with caramel, washing and sloshing around. It has a wonderful sweetness but the merest hint of meat juices like a sticky pork rib, very appropriate for the venue the brewery is based in, and I'm sure this is no coincidence. I would really love to try it 'in situ' with a big plate of ribs or the pulled-pork sliders I've read about. Oh yes. The finish is big, gooey and sweet, fading through a soft brown-bread-crust dryness into the grapefruit peel oiliness I got right at the beginning of both the aroma and taste.
This is one of the earliest recipes from Beavertown but it is an incredibly accomplished beer, soft, sweet and juicy but with doughy breadiness that pervades throughout, but without the strong soapy flavour sometimes found in rye beers.
It certainly is a very promising start.
The buzz is justified.